September 24, 2019 Seletyn Shirley Donnelly Leave a comment
I always find the old Shirley Donnelly stories interesting. Sometimes the language of those day bothers me. The range of subjects he found to write about is something else.  The actual clipping is included after the transcription. At the bottom is a little more information on the Tom and Jerry Cocktail he mentions in the story.
CLIPPED FROM: Beckley Post-Herald, Beckley, West Virginia / 06 Jan 1956, Fri  •  Page 4

Our human race has a long way to go to rid its people of superstition. No matter how far we have come it is yet true that vestigial remains of a lot of old junky beliefs linger in our minds. There is always a ready sale for cabbage on the last day or so of any year. This is true because those who cook cabbage with a silver coin’ in the bottom of the pot on New Year’s Day are legion. Along with the silver-flavored cabbage goes old fashioned corn bread. Here in the hills of home the notion persists that if one has a bait of cabbage and cornbread on the first day of the year he can be pretty tolerably clear of having plenty of victuals throughout the year, especially if the cabbage is cooked with a dime, quarter, half- dollar, Or silver dollar in the pot. Some people would not dare to enter the gate of a New Year without being fortified with the vitamins mentioned.

A lot of superstition centers around our native screech owl. One night not long ago a screech owl flew out of my garage when I drove in. It perched on a limb above the cabin where Frances Williams, our woman of colour, lives. Upon being told of the action of this small bird of ill omen, Frances was ready with her defense mechanism. It consisted of turning her right shoe upside down and tying a good sized ‘ knot in the upper left hand corner of her bed sheet upon her retiring for the night. This arrangement must have done the job, on account of Frances is still alive and doing well.

From down at Meadow Creek comes a letter from J. E. Gwinn, veteran follower of this column. In his letter reader Gwinn tells about the old country school of “Town -Ball,” a game that required the wide open spaces for playing. Each side chose up and lined up for play. Instead of tagging out the base runner after he had hit the ball as is done in modern baseball, the one playing the ball had to throw it in front of the base runner. If the runner was crossed out he was out indeed.

Another game played by country school children when Mr. Gwinn went to country school was one called “Prison base.’ Again sides were chosen up and daring runners from opposite sides would challenge and tantalize the other side to come and catch him. One would run until he was caught and then the one caught would have to join the opposition. This kept up until one side had tagged all those on the other side. The banter challenge, when one would run toward the other side and invite some of the opposition to catch him, was this: “Lend a hatchet!” His opponent would say, “Come and snatch it.” Then the first crier would say, “I’m too lazy.” That was met with “Send your Mazy.” This was responded to by, “Then come and get it yourself.” Immediately the chase was on and far afield or into the woodland. It was a vigorous game and made race horses out of the runners. After rugged games like that at school and the games followed by a number of chores on the farm, a youngster at supper time would eat up creation and drink Jordan dry. Then after an hour or two of study by lamp light it didn’t require much rocking to get a youth’ like that to go to sleep. That was rugged stuff but it was a great preventative of juvenile delinquency.

A number have written in to tell me how they used to shoe an ox. Mr. Gwinn was one of them. As I gather the bits of the different explanations together the ox to be shod was placed in stocks and raised off the ground. Heavy bands were placed around his body and he was hoisted up by a block- and-tackle lift. Legs of the ox were tied so, he couldn’t kick, or if he did, his wallop was not so powerful because his leg was tethered. It was not necessary to lift the ox very far off the ground. When he was thus suspended the ox-shoer took the hoof between his knees and, with a drawing knife, the hoof was evened off for the two-piece shoe to be nailed on.’ Great care had to be taken not to shave the hoof off into the quick, else it would make the poor beast of burden to have a sore foot.

An ox is as effective as a kicker as any old “hard-tail” mule ever dared be. In fact the ox has been such noted kicker that a proverb was coined to describe it: “Kick like a bay steer.” I reckon any other color of animal could kick but the bay steer was a past master at it. They used to say that when one would not be able to remember, nor ever knew some certain person, that “I wouldn’t know him from Adam’s off ox.” An ox often got stubborn and would lie down if he felt he was being imposed on. In such a case he was described as “A sullen ox. 1 ‘ About the only way to get up an ox like that was to build a fire under him or around him. Poor animals, brute men used to beat them with ‘ox whips” and pound them with clubs. I always thought that if any man would land right square dab in the middle kettle of hell it’d be the heartless wretch who, in a fit of ungovernable temper, would cruelly maltreat a dumb brute. Such has been done and those who’ve done it don’t deserve very much mercy.

Mr. Gwinn tells me of being out west in Iowa when he was a boy. There he once saw a man moving with six cows pulling his wagon. I’ve seen a cow and a horse yoked together in France and the farm woman plowing with this odd team. In the Museum at Upson Downs I have a heavy ox yoke that used to be owned by Mr. R. E. Amick on the Dcmpsey Road down Fayetteville way. It is a heavy yoke and has seen a lot of service in its time. Mr. Amick is about 95 years of age and has worked hard all the days of his pilgrimage.

It used to be a farm boy’s delight to help “break” a yoke of steer calves. It was pretty good Sunday afternoon entertainment in some sections of the land in the days gone by. Names of oxen always interested me. Buck and Bright were popular names applied to oxen. Another pair of good names were Tom and Jerry. Seems to me like I used to hear that name in connection with a bracing drunk in the days of the old open saloon. Out where radio and television station stands today on the outskirts of Oak Hill there was a Jenny Lind shanty saloon sixty years ago where the Tom and Jerry drink sold there was heralded far and wide. After I settled at Oak Hill some 33 years ago the bar tender in that Red Rabbit Saloon used to tell me how he mixed that strong drink concoction. As he would tell me, his eyes would sparkle and his mouth would water in a way I shall never forget. He was an old man when knew him but he warmed to his subject when I used to get him tell me about the hey-day of the notorious Red Rabbit place of business. Even in his last days erstwhile bartender was full of his subject and mention of his Tom- and-Jerry drink of old time was all that was necessary to tee him off on a long discussion of it. 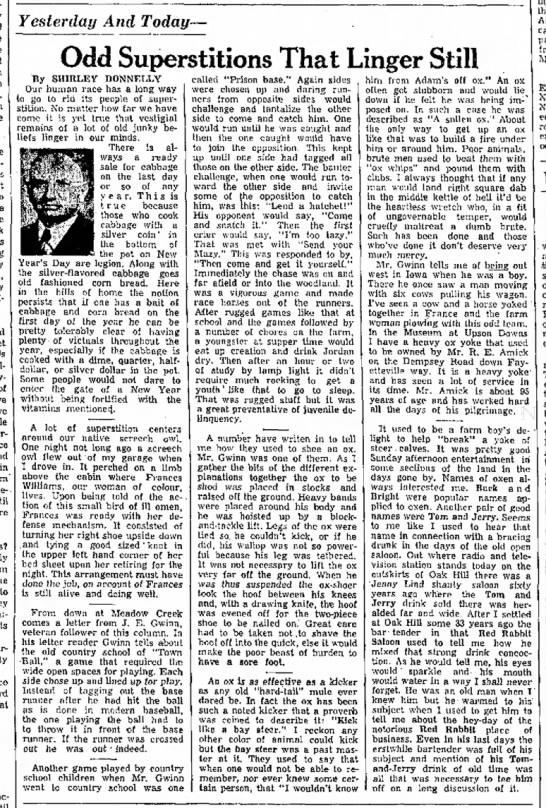 From What’s Cooking America, I found an article on the Tom and Jerry Cocktail:

“Tom and Jerry cocktail recipe is a classic holiday cocktail drink that is enjoyed by many starting with the Thanksgiving holiday all the way to New Year’s day.  The main ingredients of the Tom and Jerry batter is made of beaten eggs, sugar, and vanilla.  A healthy scoop of the batter is added to the cup, then hot water, and the liquor of your choice (rum, brandy or whiskey) is stirred in.  The Tom and Jerry cocktail is finally topped with a dash of nutmeg.  The taste is best described as drinking a warm Christmas sugar cookie.  Once you make your first batch of batter mix, it gets a bit addictive as it is so easy to make and so delicious!” 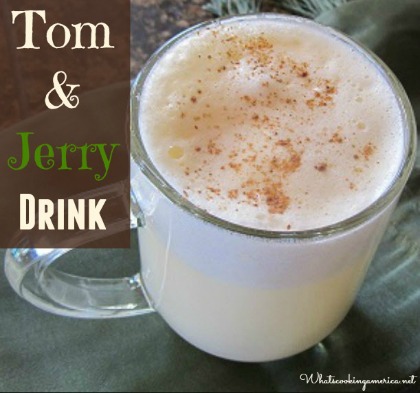