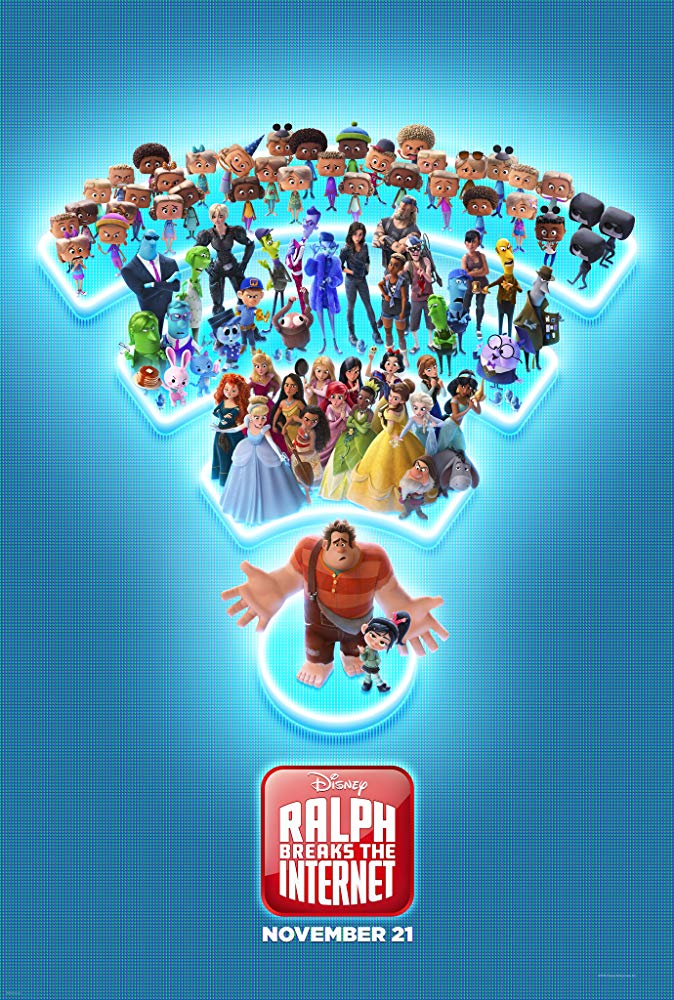 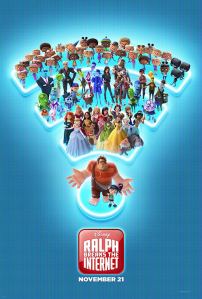 Son, Daughter and I watched this at the theater.  Earlier in the day we watched the first one so I would be up to speed on the background stories.  While I thought both were solid cartoons with life lessons for the kids who watch them (and some hidden adult humor for the parents who suffer them), I would not envision either being “Oscar” animations.

Something interesting for every Disney movie and theme park is the “Hidden Mickey“.  Because Disney and Mickey Mouse go hand in four-fingered-gloved hand, they like to include the iconic three-globed shadow of Mickey’s head and ears.  I paid extra attention during Ralph and, sure enough, there are a couple.  No, I will not tell you where – that takes away the Disney fun.  Likewise, there were tons of cameo and image appearances made by (what felt like) every Disney character ever (exaggeration, I know, but still felt like it).  Then there are the product placements, corporation logos, social media programs, etc.  To try to find them all and notice them was almost overwhelming.  But all of that is a great marketing ploy.  It is how they get people to watch it for a second time (or buy the DVD, or rent it) to see if they can spot as many product placements or Hidden Mickeys or company names as possible.  (Side note: one of the best examples of re-watch marketing HAS to be Sixth Sense.  At the end you realize that every time the color red was shown it was an indication that something was about to happen and a connection to the dead AND that Bruce Willis was dead throughout.  You have to watch it a second time to catch the swatches of red and try to understand if he ever touched or moved something that would have given away his deadness.)  Slash Film put together a comprehensive (yet not complete) list of some of the cameos and Easter Eggs you might have missed HERE.

I liked both movies, don’t get me wrong.  But…deep inside I cannot help but feel as if I just finished watching a 111 minute cross over commercial.  I would still recommend watching.  To see the oldest of toons like Clarabell The Cow and all of the Princesses in the same feature is pretty amazing. My takeaway life lesson for this particular Disney film is the importance of friendship, how it means different things for different people and it is important to be loyal to those who stood by you through it all – oh yeah, and the importance of clear and truthful communication.

Have you seen it?  What did you think?

IMDB Synopsis: Six years after the events of “Wreck-It Ralph,” Ralph and Vanellope, now friends, discover a wi-fi router in their arcade, leading them into a new adventure.