They guy in the wheelchair is just horrible as a fake human. I was not unhappy that he died.

I love the costumes of the kids.  I could so totally wear a pair of bellbottoms now.

My favorite scene was when they beat the girls ass with the broom!

The extreme closeups are amazing.

So, in conclusion – if you want to see classic horror just prior to the industry’s move to all things T&A early 80s, this is the best one.  This should always be on the list of top 20 of the horror genre.  Just great.

IMDB Synopsis: Two siblings and three of their friends en route to visit their grandfather’s grave in Texas end up falling victim to a family of cannibalistic psychopaths. 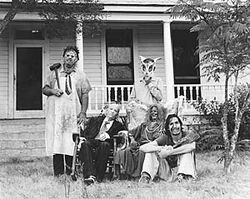