I have been doing a considerable amount of digging in online newspapers of late.  In trying to find the obituaries (I use those as confirmation of dates of death on ancestry searches where there are no available death certificates), I have oftentimes ended up on the “funny page” of the newspapers and have stopped to look at what was considered comic strip worthy for that time.  On a handful of occasions I came across one strip called Pogo.  I looked up the strip to see if I could find some of the more well known takes and I found this one from Earth Day 1971 which strikes a chord for me.

According to Wikipedia:  “Pogo is the title and central character of a long-running daily American comic strip, created by cartoonist Walt Kelly (1913–1975) and distributed by the Post-Hall Syndicate. Set in the Okefenokee Swamp of the southeastern United States, the strip often engaged in social and political satire through the adventures of its anthropomorphic funny animal characters.  Pogo combined both sophisticated wit and slapstick physical comedy in a heady mix of allegory, Irish poetry, literary whimsy, puns and wordplay, lushly detailed artwork and broad burlesque humor. The same series of strips can be enjoyed on different levels by both young children and savvy adults. The strip earned Kelly a Reuben Award in 1951.”

So, while snooping around in the tubs of miscellaneous chaos (aka Daddy’s stuff I pack ratted for no reason whatsoever), I see this set of funny pages from a 1975 Sunday newspaper with Daddy’s handwriting on the front:

I am guessing that maybe Daddy was a fan of Pogo as well.  He saved the paper that ran the last Pogo comic strip.  I find that interesting as I have been reading them of late.  Maybe my subconscious remembers Daddy talking about them?  I don’t know.  Here is the final strip from the paper Daddy saved:

I found a clearer print online:

Here are a couple of the comic book covers: 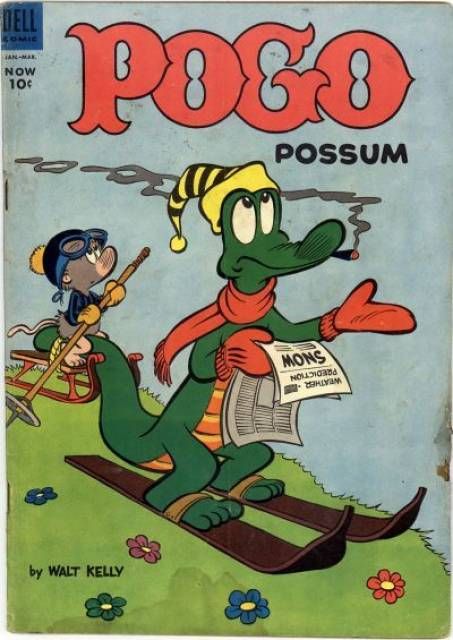 I think I will try to find a couple online to pick up for my library.  I think is pieces hold up well through the years.

Have you read the strip before?  What are your thoughts?  Let me know in the comments below.