St Pat’s weekend and everything is green! I decided to hang at Mander’s and make my third setting of Shepherd’s Pie this week.  It turned out to be the best out of the three.

The way we made the pies on this night:

I did not use proper measurements, I pretty much went by taste and smell and texture.  Also, we were very late getting started on cooking so we picked up frozen ingredients in some instances because it was quicker.

I started by sauteing onions (we picked up some in the freezer section, I used 1/4 of the bag) and minced garlic (two heaping teaspoons from the jar) and a LOT of Worcestershire sauce.  I sprinkled on 1/2 teaspoon of basil (first, I placed the basil in my hand and crushed it between my fingers – even though it is dried – to allow the aroma to break forward).  I added salt and pepper.  There was enough sauce that it made the kitchen smell heavenly. I also threw in half a bag of the shredded carrots so they would be almost fully cooked and make for a quicker time in the oven.

Once those were all softened, I added a little over two pounds of lean burger.  I added a couple shakes more of basil, salt and pepper.  I also added more Worcestershire sauce.  Once the meat browned, I drained the grease off.  Taking a handful of all-purpose flour, I coated the top of the meat.  I then turned the meat over and blended the flour in.  I added 1/4 cup water.  That, added with the flour, gives the meat a little broth.

I scooped enough of the mixture into each ramekin that it was filled, leaving one inch unfilled to the top.  Three people wanted peas, one did not.  So I used a small bag of frozen cubed carrots and peas and tossed a handful of each into each of three servings.  On the fourth, I filled it the rest of the way up with the meat mixture.  Because I like to have more than just broth, I picked up a jar of savory beef gravy.  I poured enough gravy on each serving to cover the whole top – obscuring the meat mix and veggies, I did not mix or blend it in.  It offered as a cushion for the mashed potatoes.

Renau made mashed potatoes in the traditional way – we used red potatoes because we feel they are more flavorful.  We cooked aprox 3 lbs of potatoes and when mashing, used Kelly’s Irish cream butter and whole milk.  To be fancy, Nau cut the end of a zip lock back and piped the mashed potatoes on in a decorative fashion.

In a 400 degree oven, we placed the ramekins (on a cookie sheet) for apox 15 minutes (until the tops of the potatoes stated to brown).  We then turned the oven to broil for 2 minutes to give the potatoes a harder surface to dig into.  We had picked up cheese for a topping but everyone decided that it was not needed.

We placed the ramekins on sturdy plates and served.

We talked about a few Irish artists: Ross McDonell, Rich Gilligan, Harry Clarke, Val Byrne, Paddy Campbell and Seamus Murphy. It is our intention that starting in April we will have dinner at Mander’s on Friday nights and discuss artists and try to prepare a meal around the type of art or characteristics of the artist.  This was just an evening to talk about stuff and to get the ideas rolling. 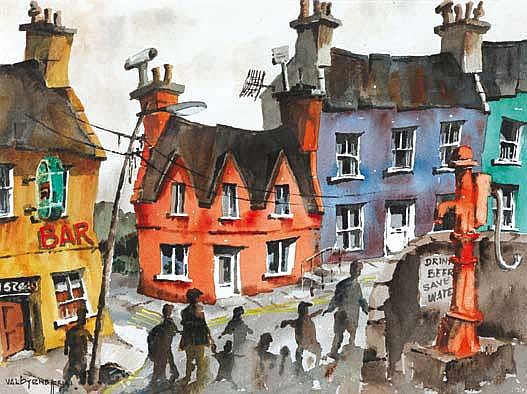