I liked this film.  It had just enough action that moved at a consistent pace. AND it had a runtime of 102 minutes.  For that, I was SO thankful.  This was the third of four movies watched in a single setting.  I enjoyed the characters.  After realizing the true plot, I fell in love with the man trying to honor his Mother while also providing for his children, even if it fell outside of doing so legally.  Although the movie was one continual car chase, it was a good storyline, solid plot and made sense to me.  Of the four watched that day (including Manchester By The Sea, Fences and La La Land), this was my favorite (of those four in particular).  I am not sure that I would qualify it as “Oscar worthy.”  But a solid film, all the same.  I give it a B+.

Did you see the movie?  Like it or hate it?  Let me know in the comments below. 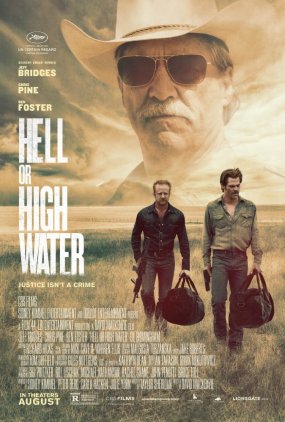 Additional Info About The Movie:

Synopsis: A story about the collision of the Old and New West.  Two brothers: Toby (Chris Pine), a straight-living, divorced father trying to make a better life for his son and Tanner (Ben Foster), a short-tempered ex-con with a loose trigger finger – come together to rob branch after branch of the bank that is foreclosing on their family’s land.  Vengence seems to be theirs until they find themselves in the crosshairs of a relentless, foul-mouthed Texas Ranger (Jeff Bridges) looking for one last triumph on the eve of his retirement.

Clips for the movie can be found:

It had an estimated $12M budget.