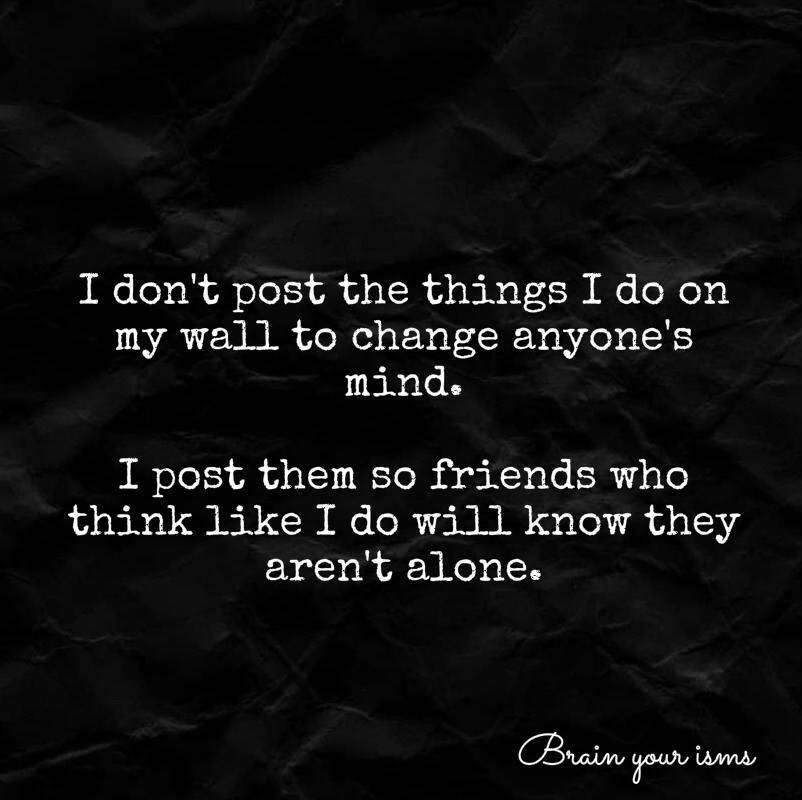 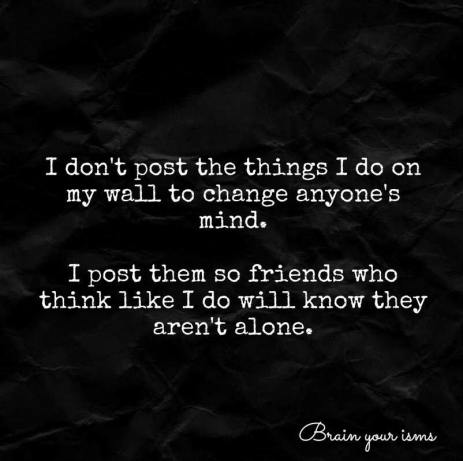 This meme resonated with me.

Not too long after the inauguration, I was asked by a young woman to step in on her social media post because she knew that I was a resource for a number of facts that supported what she was trying to explain.  She was being overwhelmed by a name caller, a bully.  She knew that something was wrong but she did not know how to articulate it.  I obliged.  Moments later, my Daughter reached out to me and asked me to read something that she was posting on, someone was bullying a conversation and their intention was to be “louder” than the others and to overwhelm.  I stepped in there as well, offering facts and was faced with a whole lot of hateful CAPS BECAUSE THAT IS HOW WE SCREAM AT PEOPLE ONLINE.  Two more occasions came up that night where I was asked (via chat) to comment on a post.  That was the driving force behind why I wanted to write blogs that were filled with articles and facts and maybe the occasional opposing opinions (to understand others can sometimes help us understand ourselves).

So, let’s go back to GUY WHO TYPES IN ALL CAPS WHILE GRIPING ABOUT THE WOMEN WHO WERE SCREAMING AT THE MARCHES… I say, on occasion, that it has been a challenge for me to have polite political discourse with people who oppose my views because I feel that (at times, with some people) they get into a frenzy to prove their point to you and when they realize that they are not proving said point, they increase their volume (that comes in a variety of forms, rapid fire comments on social media posts and louder voices in conversations).  I love to say, “Just because you are louder does not make you right-er.”

I tell you that, to tell you this: I found that the ALL WORDS IN CAPS PEOPLE were all around me.  They choked up my social media feeds (not just Facebook) with memes and slogans to scream down those who don’t see the world as they do. And their posts sometimes feel like high tide, when the water is at its highest, overwhelming the shore.  It gave me pause one day when a person who I am not truly “real life friends” with, who I am not related to, and of whom I generally do not like the attitude posted a rather vile meme (I thought about posting it here to drive home the point…but no, you will have to take my word for it).  I thought: Why in the hell is this person one of my “friends”? I have recently taken to heart those people who post “I will not defriend you because of your political posts.”  Then it hit me, I am NOT defriending this person because of one of their political posts.  I am defriending them because they do not add anything to my life other than an uptick on the number of friends I have on Facebook.  I found that I had not been defriending people, instead I had been “unfollowing” them.  That quelled the feeling of guilt for being one of those “defrienders of people with opposing views.”

I decided to scrub my friends list using a set of questions for each:

These were the questions I considered as I worked my way through my friends list.  The easiest decisions were based on if I liked the person or if I intereacted with them in recent years.  The first week I defriended several, with ease.  Then I thought that I would add this to my monthly routine.  I have gone through the list three times now.  The third provided fewer removals.  Then I thought, why stop at friends lists?  On Facebook, I made my way through the scores of pages I followed.  Unliking pages left and right.  Now, on my Facebook feed, I can roll through the page (which contains a more intelligent offering from BOTH sides) and not cringe every other post.  My Twitter account is slightly different.  I have scores of follows on that page because for that feed I like a broad spectrum of posts so I can see what the world is chattering about.  My Twitter is less personal than my Facebook.  I am more snarky there without worry of who I am going to offend.

The bottom line of my ramble here: stop feeling guilty for defriending people you do not like or approve of, whether it be because of politics or otherwise.  If you would not have those people in your house, why have them on your feed?

Have you defriended people?  What was your reasons?  Let me know in the commetns below.