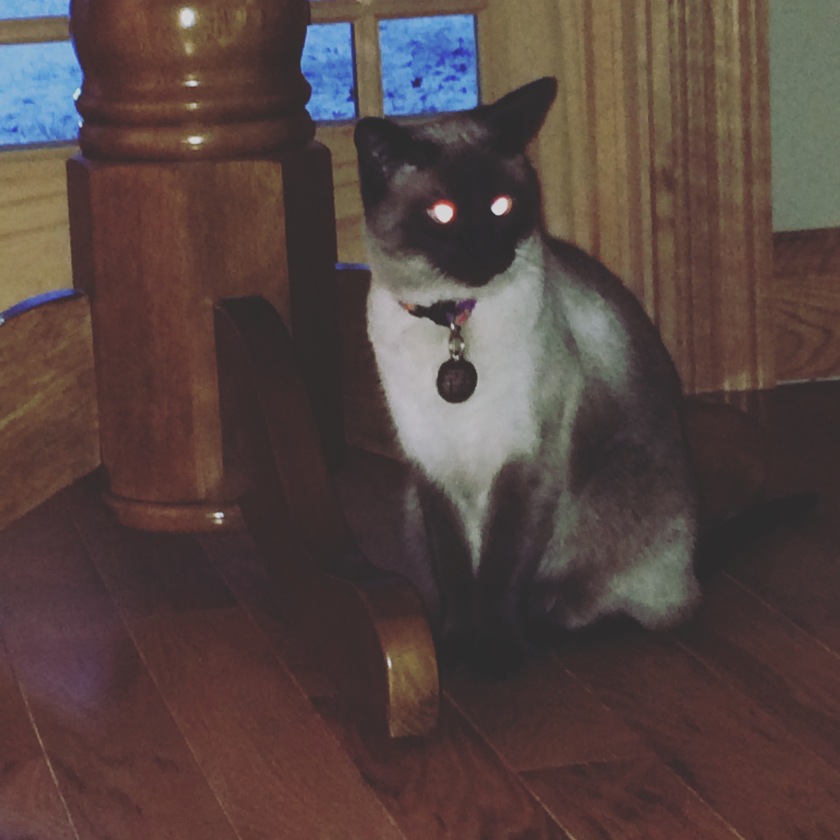 Have you ever taken a picture of your pet (or any animal for that matter) and their eyes appear to glow in the photo? Do you know why?  Cats, dogs, and many nocturnal creatures have glowing eyes because the back of their eyeballs include a reflective layer called the tapetum lucidum.

Tapetum lucidum helps animals (cats in particular) to see better in low light by working like a mirror on the retina to reflect the light back through the eyes, this allows them to maximize the absorption of light. Because at night pupils are dilated wider, allowing the maximum amount of light in during darker hours, the tapetum lusicum is more visible.

Humans don’t have this layer. Have you ever seen a photo where the person’s eyes seem to glow red or have a red spot in them?  According to wiki, this is because:

In flash photography the light of the flash occurs too fast for the pupil to close, so much of the very bright light from the flash passes into the eye through the pupil reflects off the back of the eyeball and out through the pupil. The camera records this reflected light. The main cause of the red color is the ample amount of blood in the chorid which nourishes the back of the eye and is located behind the retina. The blood in the retinal circulation is far less than in the choroid, and plays virtually no role. The eye contains several photostable pigments that all absorb in the short wavelength region, and hence contribute somewhat to the red eye effect. The lens cuts off deep blue and violet light, below 430 nm (depending on age), and macular pigment absorbs between 400 and 500 nm. But blood is the main determinant of the red color, because it is completely transparent at long wavelengths and abruptly starts absorbing at 600 nm. The amount of red light emerging from the pupil depends on the amount of melanin in the layers behind the retina. Red-eye effect is seen in photographs of children also because children’s eyes have more rapid dark adaptation: in low light a child’s pupils enlarge sooner, and an enlarged pupil accentuates the red-eye effect.