So my Daddy just came home from a ten (10) day stay at the VA hospital due to being in AFib and having Congestive Heart Failure.  Our struggle will be healthy eating and the removing of cigarettes from his daily regimen.  I will be posting recipes as I come across them and try them out (along with pictures).  In my struggle to find good food that Dad finds tastes worthy, I hope to maybe change my own diet and lifestyle habits.  So, I hope you enjoy.

The recipe description is as follows: Veracruzana is a dish full of onions, jalapeños and tomatoes from the Mexican state of Veracruz. Here we pair the zesty sauce with shrimp, but it can be served with any type of fish or chicken.

I had no jalapeños but I refused to let that stop me.  Although adjusted, it still came out with a kick and Daddy loved it!  I will post the recipe (and my adjustments) and pictures of the preparation and final dish.

Heat oil in a large nonstick skillet over medium heat. Add bay leaf and cook for 1 minute. Add onion, jalapeños and garlic and cook, stirring, until softened, about 3 minutes. Stir in shrimp, cover and cook until pink and just cooked through, 3 to 4 minutes. Stir in tomatoes and olives. Bring to a simmer, reduce heat to medium-low, replace cover and cook until the tomatoes are almost broken down, 2 to 3 minutes more. Remove the bay leaf. Serve with lime wedges.

My issue – no jalapenos or lime wedges.

I used the onions, garlic and bay leaf as instructed.  I substituted red bell pepper for jalapeños,

I heated the pan to medium heat, added the canola oil and bay leaf.  As directed, I allowed to heat for a minute before adding onions, garlic and red bell pepper.  I cooked over medium heat for a little longer than the instructions so the ingredients were less crisp and more “done”.

I added a whole package of 41-60 piece frozen medium shrimp (were on sale at WallieWorld for $5).  Cooked till they were pink.

I added a can of diced tomatoes with green chilies.  (I had picked it up for another recipe but thought it would give this dish the kick it so required).  I also added two diced fresh tomatoes that I cut up.  Once the fresh tomatoes were cooked, I removed the bay leaf. 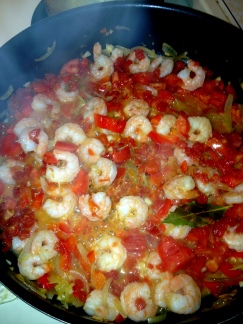 I had no lime wedges but I did have lime juice.  I gave the dish a little squirt and served over brown rice.

This dish is both low sodium and diabetic approved.  It is a low calorie dish and I am breaking my arm patting myself on the back.  Nom nom nom