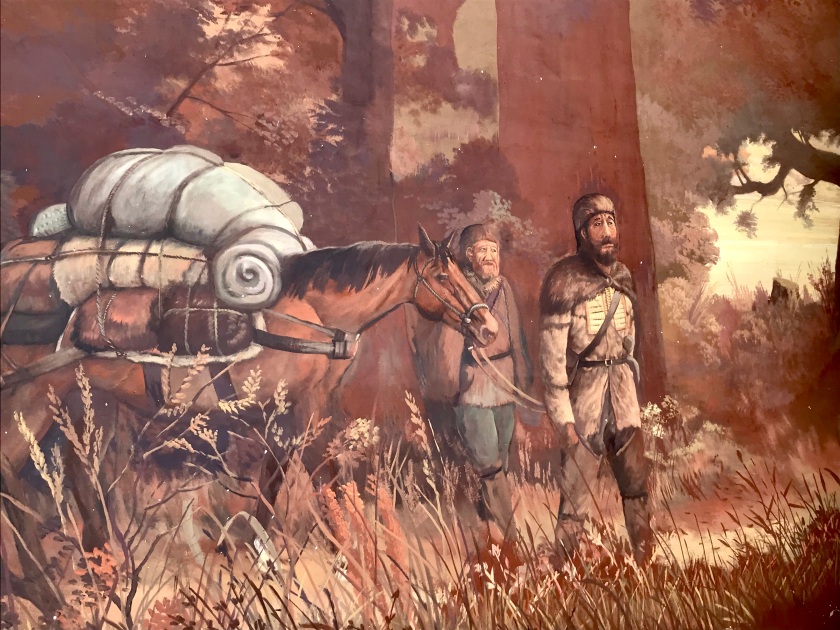 Daniel Boone (November 2, 1734  – September 26, 1820)  was an American pioneer, explorer, woodsman, and frontiersman whose frontier exploits made him one of the first folk heroes of the United States. Although he also became a businessman, soldier and politician who represented three different counties in the Virginia General Assembly following the American Revolutionary War, Boone is most famous for his exploration and settlement of what is now Kentucky. Although on the western side of the Appalachian Mountains from most European-American settlements, Kentucky remained part of Virginia until it became a state in 1791.

In putting together the various pieces of this blog, I was surprised to find that Daniel Boone was a slave owner. I understand history and that it was (for lack of a better word) commonplace “in those days” but I find it startling to read just the same.

This is the second blog in a series I am working on after spending New Year’s Day walking along Pt Pleasant West Virginia Riverfront Park and the area surrounding Tu Endie Wei (WV) State Park.

The mural and statue above are located along the Riverfront Park. I was able to walk the entire area (while taking a copious amount of photos) in under two hours. The pathways are graveled or paved and, in all, I walked aprox two miles to cover the whole area. I highly recommend this as a stop if you are in the area or if you like historical points of reference. The Battle of Pt Pleasant (though contested by some) was the first battle in the American Revolution.

I hope to have a few more posts regarding the artwork, area and historical references. Thank you for taking the time to read.

After the Revolution, Boone resettled in Limestone (renamed Maysville, Kentucky in 1786), then a booming Ohio River port. In 1787, he was elected to the Virginia state assembly as a representative from Bourbon County. In Maysville, he kept a tavern and worked as a surveyor, horse trader, and land speculator. He was initially prosperous, owning seven slaves by 1787, a relatively large number for Kentucky at the time. Boone became a celebrity while living in Maysville. In 1784, on his 50th birthday, historian John Filson published The Discovery, Settlement And present State of Kentucke, a book which included a chronicle of Boone’s adventures.

Frustrated with the legal hassles that went with land speculation, in 1788, Boone moved upriver to Point Pleasant, Virginia (now West Virginia). There he operated a trading post and occasionally worked as a surveyor’s assistant. When Virginia created Kanawha County in 1789, Boone was appointed lieutenant colonel of the county militia. In 1791, he was elected to the Virginia legislature for the third time. He contracted to provide supplies for the Kanawha militia, but his debts prevented him from buying goods on credit, so he closed his store and returned to hunting and trapping.

Daniel Boone In The Kanawha Valley
By Joe W. Savage

From the eleventh edition of the encyclopaedia Britannica is found the following extract on the life of Daniel Boone. “Having lost all his land through his carelessness in regard to titles, he removed in 1788 to Point Pleasant, Virginia, now West Virginia, whence about 1799 he removed to a place in what is now Missouri, about 45 miles west of St. Louis in territory then owned by Spain.” The fact that this early pioneer was for 12 years a resident of the Kanawha valley seems to have been entirely overlooked.

Daniel Boone’s Kentucky experiences that won for him the renown that exists to the present day were from 1769 to about 1785. Little has been written about the 30 years of his life after 1785, except that he settled in western Virginia in 1788 and in 1799 removed to Missouri. From an early deed recorded in the court house of Fayette county, Ky., dated April 28, 1786, it is found that the paper was signed by Boone and his wife at Point Pleasant, where they were residing. From Point Pleasant, Boone and his family moved up the Kanawha river in 1789 and settled on the south side of the river almost opposite the mouth of Campbell’s creek, where they lived until 1799.

The house that was located about four miles above this city was of rough hewn logs and was built in two parts of one room each. There was a passage between the rooms and a long porch in front. After Boone left for Missouri, his son, Jesse Boone, lived in it until 1816. ___time, while living in this vicinity, up the Kanawha valley was about 1787 on a hunting and trapping expedition. He travelled alone with rifle and pack and finally stopped at the home of John Paddy Huddleston on the opposite side of Kanawh river from the mouth of Loop creek. Huddleston lived with his family in a two-story log house that was kept as a sort of roadside tavern. Boone presented himself at dusk one evening, spent the night there, and when the Huddlestons arose the next morning they found him missing. Later he returned and asked for a beaver trap and, in company with Mr. Huddleston, set out for the lower shoals of Kanawha Falls. In a few days the two men exterminated a whole colony of beaver there. The incident was related by Mr. Jared Huddleston, a son of the innkeeper, and was published by Dr. John P. Hale in 1886.

Daniel Boone spent most of his time, while living in this vicinity, at surveying. His party was composed of George Arnold, Edmund Price, Thomas Upton and Andrew Hatfield. In 1795 they ran two surveys of one hundred thousand acres each from the site of Madison, the county seat of Boone county, to the Kentucky line. In 1791 he made the report of the survey accompanying this story, the original of which is still preserved in the department of archives and history in the capitol annex. Boone’s last survey, before leaving the Kanawha valley, was made on September 8, 1798 with Daniel Boone, Jr., as marker and Mathias Van Bibber as chainman.

The holdings of Boone while a resident of the county were not many. Nearly all historians agree that his nature was too nomadic to acquire any large tracts of land. An early perusal made some years ago of the assessors’ books showed that he was taxed with two horses, one negro and 500 acres of land.

Shortly after the county of Kanawha was formed by the legislature of Virginia, Boone was elected in 1789 as lieutenant-colonel of the Kanawha militia and made numerous reports through Colonel George Clendennin to the governor of Virginia. The next year he was elected to succeed Andrew Donnally as the county’s delegate to the Virginia legislature. He shouldered his pack, took his gun, and made the entire trip to Richmond and return on foot. Boone served in the legislature with George Clendennin, the founder of Charleston.

One of Boone’s adventures while a resident of this valley resulted in Boone county being named for him. About 1795 there was a family of Flinns living on Cabin creek. The Flinn home was attacked by Indians, the mother and father killed, and a daughter named Cloe Flinn was taken prisoner. Some time later Boone learned of the tragedy. He knew the location of the Indians and finally succeeded in rescuing her from their camp. Being an orphan, Boone took the girl to his own home where she was made a member of the family.

In 1847, about 50 years later, a proposal came before the Virginia legislature to form two counties from Logan county. St. Clair Ballard, a grandson of the Cloe Flinn who was rescued by Daniel Boone from the Indians, was a member of this legislature from Logan county. When the present limits of Boone county were decided upon and the question of a name had to be dealt with, Mr. Ballard told of the capture and recovery of Cloe Finn and moved by way of acknowledgment to Boone’s services, that the county be given his name. The motion was unanimously passed.

The departure of Daniel Boone for Missouri in 1799 is best described by the following paragraph from “Trans-Allegheny Pioneers”: “His starting was the occasion of the gathering of his friends and admirers, from all the region round about, to bid him a friendly adieu and Godspeed. They came by land and water – on boats, by horseback and in canoes – and, at the final leave-taking, it is said there was many a dimmed eye and moistened cheek among those hardy, weather-beaten warriors, hunters and pioneers. Boone started from here by water, in canoes, embraking [sic] at the junction of Elk and Kanawha rivers. His friend and companion, Tice Van Bibber, went with him to Missouri, but returned to Kanawha.”

Daniel Boone died at the house of his youngest son, Nathan Boone, on September 26, 1820, on the Feme- Osage river, Missouri. It is interesting to note that during the 86 years of his life, his residence of __ years in the Kanawha valley ___ the longest period Boone ever stayed in the same home.