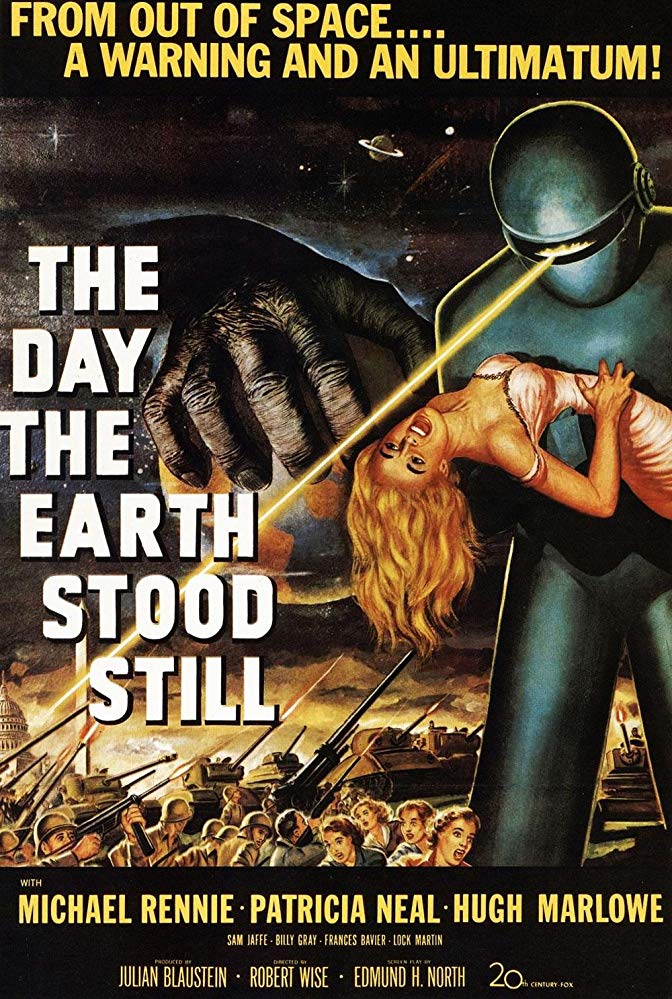 “Michael Rennie was ill the Day the Earth Stood Still but he told (what) us where we stand (on our feet).” It is the first line you hear when you attend the Rocky Horror Picture Show.

Over the next couple of weeks I will be watching each of the movie references made in the opening song to RHPS. I have only seen a few, back in the day, late on Saturday nights.

iMDb synopsis: An alien lands and tells the people of Earth that they must live peacefully or be destroyed as a danger to other planets.

We start with music that sounds as if it tinkles. The old days when the credits were at the beginning.

Bernard Herrmann, a master of unconventional orchestrations, used two Theremins to create his eerie music, one pitched higher, the other lower, cementing the early electronic instrument’s association with science fiction, though composer Ferde Grofe had employed it a year earlier in his score to Rocketship X-M, Dimitri Tiomkin used it in his music for The Thing from Another World.

According to Danny Elfman, Bernard Herrmann’s score inspired him to become a composer.

This was the second big budget science fiction feature film to be released by a major American studio since Just Imagine (1930). The first was RKO’s The Thing from Another World, which was released about three months earlier. Robert Wise was attracted to the project because of its overt anti-military stance and also because he believed in UFOs.

Holy Christmas! They use that as an exclamation! We could make this a seasonal movie… ha! This is not another military scare, scientist have confirmed it!

The phrase “Klaatu barada nikto” has become a popular phrase among sci-fi fans over the years and has been featured in other movies, such as Army of Darkness (1992). The line was also used in an episode of “The Rockford Files”. Jim Rockford says it to a huge henchman of the episode’s “bad guy”.

He asks to meet with the United Nations. Of course the Secretary tries to sell him a line that there are evils at work in the world and it would be impossible to bring everyone together. Klaatu (that’s the alien) tells him “I am not concerned with the internal affairs of your planet. My mission here is not to solve your petty squabbles. It concerns the existence of every last creature on Earth.” You know the US and Earth as a whole is going to screw this up, right? When faced with the urgency of the welfare of our planet, we are still dubious and cynical and refuse to believe “others” might know better.

Klaatu establishes that he traveled to planet Earth from 250 million miles away. 250 million miles is equivalent to 402 million kilometers and 0.00004 light-years. It would locate Klaatu’s home in a point between Mars and Jupiter, inside the known Solar system.

They bring back word that the countries will not come together. Klaatu calls out the pettiness of this planet. The jealousies and doubts. He will not talk to just one nation, it must be all of them. Klaatu says he wants to go out into the world to see why it is humans act the way they do. Although they try to lock him in his hospital room to keep him from roaming about, when a wellness check is done, he is gone!

Klaatu adopts the name “Carpenter” while hiding from the authorities. Robert Wise in a none-too-subtle nod to the film’s intentional Christ allegory.

The equations seen on Professor Barnhardt’s blackboard are authentic physics, and describe a particular form of the famous “three-body problem” in Newtonian gravitation, a problem which has no general closed-form solution. Such “many body” problems are central to navigation in interstellar space. The manner of writing and organization of the terms show that a real physicist has produced the work.

A government agent shows up and takes Klaatu away. They take him to the professor’s house…

He explains that because we are using atomic energy and potentially will use in rockets. we risk the welfare of other planets and that is unacceptable. Because violence is all humans understand, perhaps Klaatu might have to go that route. The good scientist offers to introduce him to a community of scientists. If a common understanding is not reached, planet earth will be eliminated. The scientist convinces Klaatu to do something drastic but not destructive to show the world how emergent the issue is.

Bobby waits for his Mom and her trick to come home. He tells them everything he saw. His mother doesn’t believe him at first but her trick…I mean Tom starts to ask him questions. Bobby is upset that his mother is calling him a liar. Tom invades Mr Carpenter’s privacy and searches his room where he finds another diamond. She sends Bobby to bed and Tom home.

The next day Klaatu goes to visit Bobby’s mom while Tom takes the diamond for appraisal.

Around the world there is panic. They should be paying attention now! All of the scientists have arrived for the meeting. The President is declaring an emergency. Back at the jewelers, Tom has realized that the diamond is unlike any in the world and worth a mint.

In the thirty minutes while stuck in the elevator, Klaatu explained EVERYTHING to Ms Benson. Tom has decided to turn Klaatu into the government. Ms. Benson cannot convince him to not turn him in. The whole reason he wants to turn him in is for advancement. And, just like that, Tom sings like a canary.

The military race to the boarding house, Ms Benson arrives just before them. She is able to get Klaatu into a cab before the military arrives.

Lock Martin, the doorman at Grauman’s Chinese Theater, was cast as Gort because of his nearly seven-foot height. However, he was not a physically strong man and could not actually carry Patricia Neal, and so had to be aided by wires (in shots from the back where he’s carrying her, it’s actually a lightweight dummy in his arms). He also had difficulty with the heavy Gort suit and could only stay in it for about a half hour at a time.

Back at the jail, they discuss Klaatu. HE’S DEAD????

Outside, scientists from around the world are at the ship to meet with Klaatu. The military are making them leave.

Originally Klaatu’s post-death resurrection at the end of the movie was meant to be permanent, reinforcing his God-like powers. But at the time, the Breen Office — the film industry’s censors — didn’t like the ending, suggesting it was too left-wing, and insisted that director Robert Wise and writer Edmund H. North put in the line, “That power is reserved for the Almighty Spirit”. Both Wise and North hated the line and thought it completely inappropriate — negating the concept of Klaatu’s race being all-knowing and all-powerful — but the studio wouldn’t back them up, and they were forced to put it in.

The threat we pose can cannot be overlooked any longer. Klaatu explains that these robots, like Gort, have been made to be “police”. They pick off the assholes who incite violence and damage to the planet.

Pay attention or we will obliterate Earth. Choice is yours.

Gort and Klaatu go back into the ship leaving the earthings with the ultimatum: we will be watching you. Screw up and Gort will return!

And off they go!

As an homage to this film, George Lucas named three of Jabba the Hutt’s alien henchman in his Star Wars Return of the Jedi, “Klaatu”, “Barada” and ” Nikto”.

This movie was just amazing. It was released in 1951 – 68 years ago! It covered atomic energy, politics, disinformation in the media, conspiracy theories instead of reasoning – it had EVERYTHING we see now in the news and politics! Only, a G Rated version.