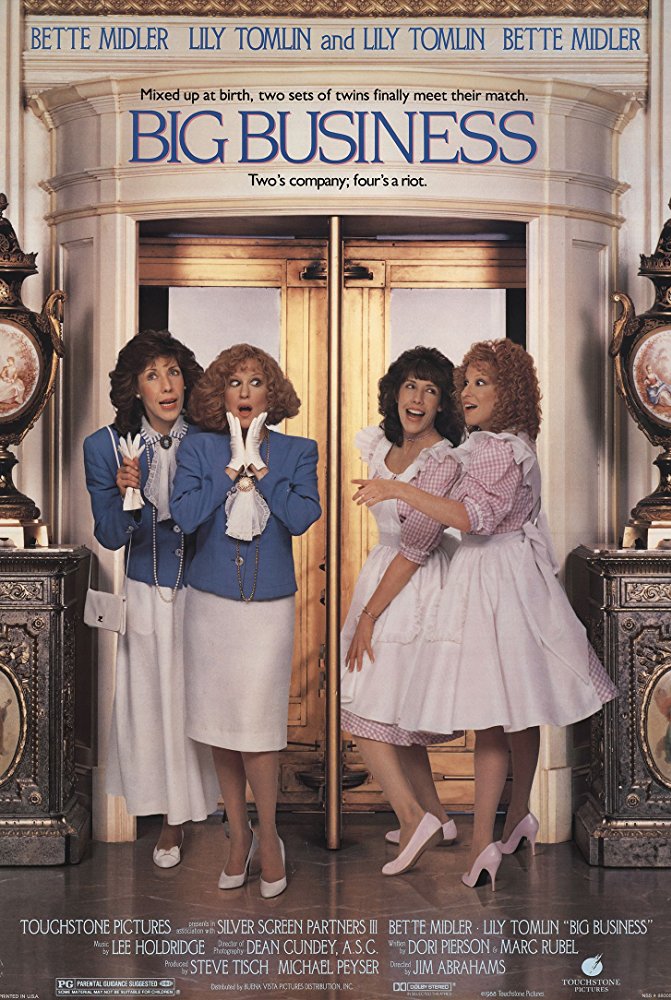 As with every blog I write on a movie or book…SPOILERS.  However, if you have not seen this movie and it has been out since 1988, you have no argument.

My friend Nau and I decided we needed a lighthearted silly funny movie this weekend.  So, we decided to watch Big Business (this decision came as we were scrolling through Lily Tomlin options).  I had completely forgotten that the bumpkin twins were raised in Jupiter Hollow, WV (just down the road from Jane Lew).  It reinforces the stereotype that we all chaw tobacco, break out in square dance at the sound of a banjo and talk like Nell – but it is not the worst as far as hillbilly stereotypes go.

The movie is about a rich couple (wife expecting), traveling through the backwoods of West Virginia when the wife goes into labor.  The hospital where the rich couple find themselves try to turn them away as the local furniture plant dictates who is allowed to be seen there.  Problem solved: the rich man marches across the road to the owner of the plant and buys it from him (ironic point #1 – some rich guy, who needs something right now, buys a WV commodity with ease and without care of how it will affect the locals).  In a comedy of errors, the elderly nurse accidentally switches up the sets and “one of each” is swapped around. In an additional twist of fate: the poor father overhears the rich father naming his girls “Rose and Sadie” and decides to name his girls the same.

Fast forward into adulthood where one set of twins now runs their father’s company and are deciding whether to shut down the factory while the other set of twins are “in the hollow” and have decided to come to NYC to the meeting of the shareholders to plea for the survival of the factory (ironic point #2 – they talk about strip mining as if it is an evil – living in WV, mining was not spoken of as an evil as it was a way of life for too many people).

You have a heart the size of an unsoaked pinto bean!

Also coming into play are the various love interests of the women. From ex-husbands to Italian investors to professional putt putt players, this movie has a man for every woman (or twin).

Country Rose is a believer of all things conspiratorial. She believes that they have been bugged and followed.  All the while, people around them “know” them and are calling them by name (which will happen with twins named the same). When walking through the office on their way to confront the evil New Yorkers, Country Rose is aghast at the lengths these folks will go to dig up information on them.  She delivers my favorite line of the movie: I got on my Tuesday panties today. But you know that. Don’t you?”

It is a comedy of every error possible.  Watch it for a good chuckle but remember, not ALL West Virginians are activists fighting to keep the strip mines from destroying their local business while loving a professional putt putter and having a sister that can yodel like an angel.  Only the lucky ones.

IMDB Synopsis: In the 1940s in the small town of Jupiter Hollow, two sets of identical twins are born in the same hospital on the same night. One set to a poor local family and the other to a rich family just passing through. The dizzy nurse on duty accidentally mixes the twins unbeknown to the parents. Our story flashes forward to the 1980s where the mismatched sets of twins are about to cross paths following a big business deal to closedown the Jupiter Hollow factory.

Music: 4 (come on, the yodeling alone had to sell a million records, didn’t it??)

Roon Dimmick: Hey, I like your kimono! D’ya get that in ‘Nam?

Roon Dimmick: That’s some classical music you got there, right?

Roon Dimmick: I could tell. No lyrics.